My husband is teaching Genesis Chapter One to Chapter Eleven and he’s entitled it: “Creation to Confusion”.

Tonight, we went through Chapter Two verse by verse. This is where Adam gets put to sleep by God and Eve is fashioned from a rib or part of Adam’s side.

After Adam named all the animals, perhaps he noticed they were created male and female and as of yet, he didn’t have a female counterpart.

In Chapter Two, God speaks prophetically about man leaving his father and mother to unite with his wife as “one flesh”.

Adam and Eve didn’t have earthly parents, which is why leaving parents and cleaving together is for future couples.

The first man and woman at the end of Chapter Two were “naked and not ashamed”.

They were alone with God; they knew nothing of evil.

Next week, we’ll study Chapter Three in Genesis, when sin entered the world. The difference in Adam and Eve’s life must have astounded them and brought great regrets.

I like going to Bible studies because the leader digs into other resources. In our case, commentaries; dictionaries; experts; and of course, a thorough reading of the Bible and prayer for guidance are employed.

We decided Adam must have been more intelligent than we are now because he named every animal and bird. “How many could you name?”

One of the classmates said maybe thirty.

We guessed there must have been a huge multitude of animals and birds represented. It occurred to me, not only did the names need to be created, but remembered so he didn’t repeat himself. Yowza!

Adam lived to be eight hundred years old, so the children, grandchildren, and on and on, his following generations could have asked, “What was the garden of Eden like?”

In Genesis 2, it says God formed trees before Adam’s eyes.

So, for eight hundred years, he could tell of his personal experience with the Creator to anyone willing to listen.

That’s what’s so amazing about the Bible. There’s always more to learn.

My husband asked, “As God brought forth the animals living on land and the birds of the air to Adam, to be named, how would this newly formed man relate to God?”

I said, “He would have been in awe of God and His amazing creativity.”

When we considered that Adam hadn’t been around for more than a matter of hours, this was an opportunity for Adam to get to know God in a way we’ll never experience this side of heaven.

My husband and I believe Creation occurred over six twenty-four-hour periods of time. Adam, Eve and all animals, (with trees and herbs for food), came into being fully grown so they could function and then eat the produce immediately.

Genesis is an extremely important book in the Bible. If I don’t believe Genesis is God’s Word, inspired and given to men, then what else in the Bible can I pick and choose to believe or disregard?

Hi! If you celebrated Thanksgiving, I hope you were able to enjoy family and/or friends, food, and able to give at least one blessing you’re grateful for this November. 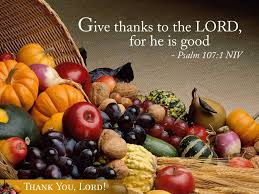 As we sat around a large rectangular table borrowed from the church, I looked at each individual adult and child and love filled my heart and mind.

As our middle grandson said our Thanksgiving prayer, I savored his quick acceptance to the question, “Who wants to pray before the meal?”

The adults and other children quickly agreed to his response and bowed their heads. It was short and to the point and it moved this grandmother’s heart.

Psalm 37:3  Trust in the LORD, and do good; Dwell in the land, and feed on His faithfulness.

Psa 37:4  Delight yourself also in the LORD, And He shall give you the desires of your heart.

Psa 37:25  I have been young, and now am old; Yet I have not seen the righteous forsaken, Nor his descendants begging bread. (NKJV)

God has been blessing my family and me lately, not because we’re good, but because He’s good.

I ordered a Dragon Speak Upgrade after calling Nuance Co. to be sure I didn’t need an original product to upgrade from. The customer service representative said the product could stand on its own. When it didn’t, they made it right. They requested receipts and had a record of my conversations as proof that all was legitimate.

My daughter and her husband need a better car and his mom sold them hers for a good deal.

I read in the book of Luke near the end where Jesus gave up His life for us, taking on the punishment for our sins. Since He was willing to give up His physical life for everyone, it makes sense that He would provide for our material needs.

He’s not a cash register in the sky, but He does say in Matthew, chapter 6 that if we would seek first the kingdom of God and His righteousness, then all the food and clothing we needed would be provided for us by Him.

There is so much insight in the book of Matthew. A pastor I met years ago told me to read Matthew chapters four through seven as often as I could and they would benefit me. The Beatitudes are in those chapters.

I hope you are seeking God in these turbulent times. I’ve asked Him to prove Himself or to show me answers to questions that arose from things I read in the Bible, and I’ve never been disappointed. Sometimes I’d hear a sermon on the radio or I’d ask a more mature Christian to please explain something for me. I’d read the Bible and the thing I wondered about would come up in another section and I’d have clarity. God is good. He answers prayer.

May God bless you and yours.

Yesterday I meant to tell some verses that Jesus spoke. In John 6:26-29, (NKJV) “Jesus answered them and said, ‘Most assuredly, I say to you, you seek Me, not because you saw the signs, but because you ate of the loaves and were filled. Do not labor for the food which perishes, but for the food which endures to everlasting life, which the Son of Man will give you, because God the Father has set His seal on Him.’

“Then they said to Him, ‘What shall we do, that we may work the works of God?’

“Jesus answered and said to them, ‘This is the work of God, that you believe in Him whom He sent.’”

Jesus spoke often of faith and repenting of sin because the kingdom of God was near then; how much closer is His return over 2,000 years later?

One of the pastors at our church taught on the dispensation of times. She said we’re at the end of the Church Age. The next dispensation on her teaching chart is the Rapture of the church: (believers/disciples).

My youngest daughter goes to gatherings with friends. They eat good food, pray together, talk, laugh, occasionally hear from someone with a prophetic gifting. I’ve told her, “I want to go.” She finally got an opportunity to invite me. Tomorrow is the day. I’m expecting God to show up. After all, He says in the Word, “If two or more gather in My name, I’ll be there in the midst of them.”

Have you ever been overwhelmed with life? Sometimes I get down because of hearing of trials others are going through, along with my own stresses. Some months ago my husband committed to attending a dinner function with friends of ours one night per month. I balked. One requirement was to bring a dish to pass, sometimes the main entree, and I felt exhausted from all that I do already. He told me fine, I could stay home and he would go.

He knows me well. I am an extrovert. There’s no way I am going to want to miss out on a gathering of friends and time with him in a fun atmosphere. Besides that he told me he needed it and he thought it would be good for me, too. So I reluctantly agreed. After we got there, they asked me to start bringing my guitar. Oh brother, another responsibility. I found it hard to say no.

The last two months, I’ve felt stretched almost to the breaking point. After composing myself at home and praying like crazy, I’ve gone. Once there, we pray for dinner and eat good food. We talk and laugh. A couple of the men kid around with such good natured fun, I can’t help but join in with the jokes and the story telling. Then another guy and I play guitar so everybody can sing to the Lord. We then have a devotional from one of the attendees. It is amazing how much better I feel emotionally and spiritually after these few hours of camaraderie. Plus I’m learning new songs and to play guitar better since he’s at a higher level of proficiency.

After one of the evenings, I told my husband what a blessing it is to attend these dinners. “I knew it would be good for you.”

He’s right so many times when we have disagreements. Whenever he reminds me that he was right, there’s always a twinkle of play and love in his eyes. All I know is that I thank God that He directs my paths, and sometimes it’s with a little push from my husband.

C.S. Lewis wrote in Mere Christianity that pride leads to every other vice. If that’s the case, we all have pride, and God does not like pride. Proverbs 8:13 says, The fear of the LORD is to hate evil; Pride and arrogance and the evil way, and the perverted mouth, I hate.
I went to a dinner with eight other people tonight. It was my turn to bring the main dish. Other folks brought bread, or salad, or the dessert. I worked on a homemade sauce from organic tomato sauce, organic crushed tomatoes, and a half portion of organic tomato paste, a half non-organic. A little parsley that was growing in a pot in the kitchen, a little taste of regional honey, other spices, It seemed flavorful. Then, adding sixty-four small store-brand turkey meatballs, it simmered for hours. When I sampled it, it tasted mostly of ground turkey, which didn’t appeal to me.
I thought it was because I’ve been eating vegan foods most days. When the whole group raved over the salad, I asked my husband how the sauce was. “Okay.”
“Ouch.”
I like to think I’m a good cook.
Then, I pulled out my guitar. The guy who usually plays re-strung his guitar last night, so he didn’t want to bring it tonight. I usually coast along, following his lead. When i play at church, I use music sheets and don’t memorize the chords. He refused, in a polite way, to take my guitar. “Go ahead. Play some songs, the chords will come to you.”
I couldn’t convince him to use my instrument. So, I gave in. Some songs sounded okay. Not one was perfect. Occasionally, I stopped strumming and we sang                 a cappella.

Afterwards, my friend said, “You got stretched tonight, didn’t you?”
“Yes, I did.”
In Proverbs 16:18, it says, Pride goes before destruction and a haughty spirit before a fall.
It occurs to me that when I pray for God to change me to be more like Him, He’ll gently point out areas that need improvement. He’ll lovingly chip away at stuff that needs to go.
I saw pride raise its ugly head in two areas tonight. There could be more, hidden away, trying to trip me up. “LORD, help me to be aware of things You want gone. Thank You for the grace to adapt and repent. I can’t do it without You.”